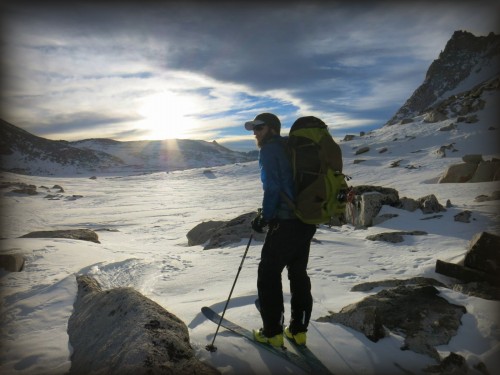 Crossing a frozen lake in the high Sierras

‘Pepper’ and ‘Trauma’ have successfully completed the Pacific Crest Trail (PCT) in winter, likely a first ever achievement.

The portion through the high Sierras was the last, most difficult stretch with no access to amenities or human settlements. They had not crossed a single open road south of Highway 88 near Lake Tahoe until they reached Walker Pass in the southern Sierra at which point Lichter claimed they were “skinny and tired”.

They experienced mostly good weather but had some very high wind gusts and two days of snow showers, each dropping about two inches of snow.

The southernmost portion of the trail took them through the San Gabriel and San Bernardino Mountains, San Jacinto and Laguna Peaks. Through this portion they have had a few snow showers but also spring conditions with temperatures up to 60°F. Forry happy to be finished with Glen Pass Shawn “Pepper” Forry and Justin “Trauma” Lichter are hiking the 2663 mile Pacific Crest Trail from the Canadian border, across the state of Washington, Oregon and California, to the Mexican border. The trail leads through the most remote and mountainous regions of the states including the Cascade and Sierra mountain ranges. It is believed to be the first winter attempt since an unsuccessful attempt by a husband and wife in the 1980’s.

The best way to follow their journey is through Justin’s blog site, Justin’s location tracker and Shawn’s Facebook photo collections. Shawn also has a webpage containing information about the journey including reference articles. Winds around 60-80 mph on the way up Gabbot Pass ‘Trauma’ getting some shelter Looking down to Gothe Lake from Alpine Col. Heading down a chute through Forester Pass Collecting water for the night. On their way out through the southern Sierras. Completion of the trail at the Mexican border. Note monument and border wall Camping in desert chaparral as they near Mexico.

All photos courtesy of Shawn Forry and Justin Lichter, all rights reserved.

« Cyclist in Mongolian Winter Forced to Improvise After Stove Failure
Deep Channels of Pythons, Possible Crocs and A Leopardess »